The Beginning of the End

The first five books of the Bible are called: “the Law”, “the Law of Moses” and “the book of Moses” (Neh 13:1). Sometime between the Old and New testaments the names Genesis, Exodus, Leviticus, Numbers and Deuteronomy were added to the books. During the third century AD, the title “Pentateuch” meaning “five fifths” was also adopted. Originally the Book of Moses was considered one book and so, for the purpose of this article, we will refer to the first five books as the ‘Book of Moses’. 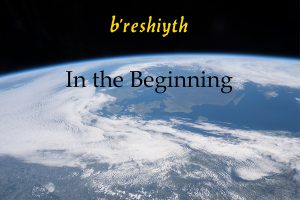 The opening word of the book has arrested attention for many years and has brought much fruitful discussion. As many readers will be aware “in the beginning” is one word in Hebrew – b’reshiyth.

Scholars point out that ray-sheeth has an antonym in Hebrew pronounced akh-ar-eeth. In English it seems to rhyme: ray-sheeth, akh-ar-reeth. Say it a few times and see how it sounds! Akh-ar-reeth first occurs in Genesis 49:1 and is translated “last”, hence first and last. The suggestion is that when Moses chose to build the opening phrase of the most important book that would ever be written, he chose under Spirit guidance to start with a word that implied an end in mind! If you wonder perhaps that ray-sheeth was the only word Moses had available, then be assured he had other options. There was another available word: tekh-il-law. This word is first translated “beginning” in Genesis 13:3 when used of Abraham: “And he went on his journeys from the south even to Bethel, unto the place where his tent had been at the beginning (trekh-il-law) between Bethel and Hai” (see also Gen 41:21; 2 Sam 21:9). This word simply means “commencement” or “originally”, but it appears to lack an antonym.

Moses could also use the word roshe as he does in Exodus 12:2: “the beginning of months”. However, God directed Moses to the use of a word that subtly nudged the student to look forward in the reading to the end. Questions like, “What end?”’ or “How and when will that which has begun have an end?” or “Where is the narrative taking us?” would all be reasonable questions provoked by this word. Remember that Moses is writing after sin has entered the world and before the people of Israel were to enter the land. The immediate audience for his book is the new generation of Israelites entering the land. It is important to read the Book of Moses with that in mind. This book is about their origins, their God and their worship.

The expression ‘compositional strategy’ at first seems strange and unfamiliar to many readers. However, it has been used by some scholars to help us understand the direction of a piece of writing. By ‘compositional strategy’ we mean the purpose and intent of the book; it answers the question, “Where is the writer taking us?”. With most books of the Bible, especially the shorter books, the compositional strategy is fairly easy to discern. Take, for example, Paul’s letter to the Galatians. Paul’s ‘strategy’ in writing is to show clearly the scriptural basis of salvation by faith and grace against the notion of salvation by works of law. So what happens when we apply this analysis to the Book of Moses to uncover the compositional strategy? If we follow the direction of the first word ray-sheeth and take the hint that there is an end in mind – not only to the world but firstly to the book – then fast forward to Deuteronomy 34, we find the record of the death of Moses and the end of the book, as composed by God. Traditionally we have considered that this last chapter was written by Joshua and parts of it may well have been. The question is: “Did he write verse 10?” – “And there arose not a prophet since in Israel like unto Moses, whom the LORD knew face to face”. We may find the thought of additional writers a bit disturbing, however, it is clear that there are redactions (i.e. adjustments to aid understanding) in the Book of Moses.

For example, consider the following: Genesis 48:7 – “And as for me, when I came from Padan, Rachel died by me in the land of Canaan in the way, when yet there was but a little way to come unto Ephrath: and I buried her there in the way of Ephrath; the same is Bethlehem”. Jacob knew Ephrath but not Bethlehem. Did Moses know Bethlehem? Probably not! By Joshua’s time, however, Bethlehem seems to be well-known (Josh19:15). There are a number of these clarifications of town names in the book which suggests that later scribes made these adjustments to aid understanding. However, a very clear example of an added explanatory comment is: “And these are the kings that reigned in the land of Edom, before there reigned any king over the children of Israel” (Gen36:31). This could be seen as prophetic, however, we take nothing away from the inspiration of Scripture by seeing it as shaping the message of Scripture by an inspired hand.

Deuteronomy 34:10 presents a more intriguing thought. To understand the possible implications of verse 10 we need to go back to Deuteronomy 18:15: “The LORD thy God will raise up unto thee a Prophet from the midst of thee, of thy brethren, like unto me; unto him ye shall hearken”. The promised prophet we know to be the Lord Jesus, the Messiah to whom the Jews look even today. Deuteronomy 34:10 is not just a superlative of the character and life of Moses but a comment on the fact that the prophet like unto Moses had not come. It hardly seems likely in the short time between the death of Moses and the end of Joshua’s time that anyone would think that there was sufficient time for the fulfilment of the prophecy of Deuteronomy 18. The suggestion is that verse 10 was added much later, in fact, by Ezra. Ezra is noted as a great scribe of the law: “Now this is the copy of the letter that the king Artaxerxes gave unto Ezra the priest, the scribe, even a scribe of the words of the commandments of the LORD, and of his statutes to Israel.” (Ezra 7:11). These words imply that Ezra was more than just a copyist; he was instrumental in preserving the Scriptures intact and maintaining the integrity of the text to protect it from those who would change the word of God to suit their own end.

This is what Jeremiah wrote of his generation: “How can you say, we are wise, and the law of the LORD is with us? But behold, the lying pen of the scribes has made it into a lie.” (Jer 8:8 ESV). The writing of books was an instruction from God (Exod 17:14); however, not all books were profitable (Eccl 12:12) and many were wrong. The following chart gives a list of most of the extra books extant during the time of Moses and the prophets and mentioned in the scripture:

The phrase “the book of the wars of the Lord” is intriguing. However, many other books existed that were corrupt, such as the work of the scribes in Jeremiah’s time who were re-writing the scriptures to suit themselves, as some are today. Later versions of the corruption of scripture can be found in the Apocrypha. At least one of the books in the Apocrypha directly contradicts the book of Ecclesiastes; compare the book, the Wisdom of Solomon Chapter 2 with the Ecclesiastes generally. Ezra had the task of redacting (preparing for publication) the OT into the books we have today and under divine inspiration shaping them slightly to develop a theme.

Brother Roberts agreed with this view in The Christadelphian, Vol 33 (1896), p382-383 where he wrote: “We are informed that the oracles of God were “committed to” Israel, and that the spirit of God was with the priestly and prophetic class who were their immediate custodians (Rom 3:2; Neh 9:30). This would supply the inference that whatever was necessary to complete a writer’s record who could not complete it himself because of death, would be supplied by another writer equally qualified by spiritual guidance: as where God said to Joshua, “Moses my servant is dead,” and gave him directions suitable to the fact. This reasonable inference is confirmed by the express testimony of Josephus – (himself a member of the Aaronic custodian of the Scriptures) – that Ezra, on the return from Babylon, who is described as “a ready scribe in the law of the Lord,” edited or redacted and put into complete form the writings of inspiration in use among Israel, as distinguished from those other writings which are recognised by Josephus as not inspired. It required an inspired man to do this, and Ezra appears before us in this character.”

Returning to Deuteronomy 34:10, this verse clearly shapes the whole of the Book of Moses. The verse is telling us that the one like unto Moses promised in Deuteronomy 18 had not yet come. So the question is: “How much time should be allowed to elapse before one could say, “And there has not arisen a prophet since in Israel like Moses, whom the LORD knew face to face” (Deut 34:10 ESV)?” We suggest that as Ezra closed the canon of OT scripture sealing it against the rising apostasy, he did so leaving the message that every generation of faithful servants of Yahweh longed for, the “one like unto Moses”! (Acts 3:22). With this insertion, the end of the Book of Moses is linked to the beginning – the promised seed of Genesis 3, linked in turn to the promised seed to Abraham (Gen 12) who would come from the loins of Judah (Gen 49:10) and reign from the sanctuary on behalf of Yahweh (Exod 15:17-18) but at the point of the sealing of the OT canon, had not yet come. Therefore, the ‘compositional strategy’ of the law is to reveal and anticipate the Messiah. The Book of Moses is not about law, but rather how people lived under the law and, how they failed and required a better covenant.