Bible students who have had the opportunity to visit places and countries recorded in the Bible will often see Bible stories replicated in mythology in the tombs or temples they visit. This is especially true of nations surrounding the Promised Land such as Egypt, Syria, Iraq, Iran, Turkey and Greece.

The question often pondered is: How did this happen?

Recently we had the opportunity to revisit Egypt and go through some of the larger temples in that country. What we found was a recurrent theme being depicted—warring gods, fratricide, serpents, holy and most holy places, trees of life and so on. There were also creation stories of heathen gods who controlled or produced light and darkness, trees and animals.

Most commentators who deal with Israel and Egypt, especially during the Exodus period, attempt to show that Moses borrowed from Egyptian symbology. They argue, for example, that the similarities between the tabernacle and Egyptian temples as well as between the cherubim and Egyptian sphinxes are too coincidental to ignore.

So, did Moses just copy Egyptian themes? To answer this, we firstly need to consider some biblical background relating to the establishment of the nation of Egypt.

Before the flood and prior to the rise of Egypt, we have a description of the rapid advancement of civilisation through the line of Cain. He builds the first city. His seed are then responsible for introducing polygamy, trading, entertainment and metallurgy to the world. Brother H P Mansfield sums this up in The Expositor: “He introduced permissiveness (polygamy), profit, pleasure, power and apostacy.” The process is familiar to all societies since that time.

Methuselah was the timekeeper, so to speak, to the inhabitants of the world, warning them that at his death their lifestyle would come to an end. For a millennium and a half there had been a serious moral decline in humanity since the foundation of the world in the early chapters of Genesis. Their wickedness was great and hence the “flood in which only eight people were saved”. It was a disaster to the world in human terms but a new beginning for the earth in God’s sight.

One of the characteristics of the pre-flood world was that mankind had corrupted God’s way in the earth (Gen 6:12). This meant that “the way of the tree of life” had been lost by the majority. The world had sought out its own way to worship and this pattern was to be repeated after the flood as well. 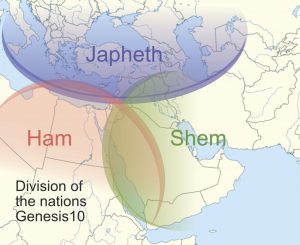 Genesis 10 provides a summary of the 70 nations that were established in the earth through Shem, Ham and Japheth after the flood (Gen 10:32).

The Ussher Chronology (below) is 17th century chronology of the history of the world formulated from a literal reading of the Old Testament by James Ussher, the Archbishop of Armagh and Primate of all Ireland (Wikipedia).

The use of Ussher’s Chronology will provide enough reasonable detail to sequence the events, however, some of the dating could be challenged. The earth was divided into different languages four generations after Shem, some 98 years or so after the flood (Gen 10:25).

As some of Noah’s family moved eastwards, the Tower of Babel became the central focus of their religious worship. It was most likely a ziggurat and its design was used elsewhere in the world in various locations and continents. The people came to establish their own name; their own religious identity. Nimrod had build an empire and his religious influences were transferred to the rest of mankind as they rapidly spread across the world, taking their religious prejudices with them.

Record of the origin of Egypt

The Egyptian civilisation was derived from Ham through Mizraim (Gen 10:6). This is confirmed by Flavius Josephus and other historians. Wikipedia is in support of this comment saying “Neo-Babylonian texts use the term Mizraim for Egypt. The name was, for instance, inscribed on the Ishtar Gate of Babylon. Scripture also calls Egypt “the land of Ham” (Psa 105:23, 27; 106:22).

“‘Mizraim’ – Signifies oppressors, from matsowr, to limit, hedge in, distress, derived from a root tsuwr, to cramp, confine. The word has been rendered adversaries, beasts, distress. Mitsraim is the Hebrew name for Egypt. The plural form of the name related to Upper and lower Egypt.

Ham’s children founded the early African and Middle Eastern civilisations and with the whole earth being of one language (Gen 11:1) it was relatively easy for these sons to adopt the emerging religious ideas that gave rise to Babel.

There are 681 references in Scripture to Egypt and Egyptians. Pharaoh is mentioned 273 times both in the Old and New Testaments and this highlights the key role that nation had in Israel’s history. Tragically, Israel turned to Egyptian mythology and idolatry in the closing days of their nation’s existence. Hence we read in Ezekiel 8:10 that they were worshipping “every form of creeping things, and abominable beasts, and all the idols of the house of Israel, portrayed upon the wall round about.” Their walls looked just like the walls of the temples in Egypt; full of grotesque, mythological creatures.

Mizraim established Egypt, according to Ussher’s Chronology, around 2242BC. He heads south and his brother Cush stays in Mesopotamia until his descendants eventually move to the area now known as Ethiopia.

Noah and his family would have brought the technical knowledge of construction, metallurgy and its associated skills with them into the post-flood world.This meant that civilisation would once again flourish rapidly.

The world immediately after the flood

At the end of Genesis 11 we learn that mankind was living in very separate areas of the world. What did their world look like from a religious perspective? Paul supplies the answer. In Romans 1:21-23 he writes “that, when they knew God, they glorified him not as God, neither were thankful; but became vain in their imaginations, and their foolish heart was darkened. Professing themselves to be wise, they became fools, and changed the glory of the uncorruptible God into an image made like to corruptible man, and to birds, and four-footed beasts, and creeping things.”

Paul is describing a rapid religious decline. He starts from the time when they knew God, that is, the time when Noah stepped out of the ark and offered an acceptable sacrifice to God in Genesis 8:20, to the time they created their own way of worship—honouring animals and insects.

Paul goes on to say that God gave them up to their own ways and this meant that man’s worship descended into darkness only the more rapidly.

It would appear that the stories of the creation record and the flood were readily recounted by societies after the flood, but within a short space of time the truth of the message was quickly corrupted. Rather than turning to the Creator of life and the Judge of all the earth, they “changed the truth of God into a lie, and worshipped and served the creature more than the Creator, who is blessed for ever” (Rom 1:25).

What continued was false worship and the disregard of Yahweh who made all things. As a result, civilisations were founded on idolatrous creature-based worship.

What was the result?

In a relatively short space of time (approximately 100–150 years) the men of Babel, Shinar and Egypt had created these religious practices:

There are several sources that detail the above dot points: 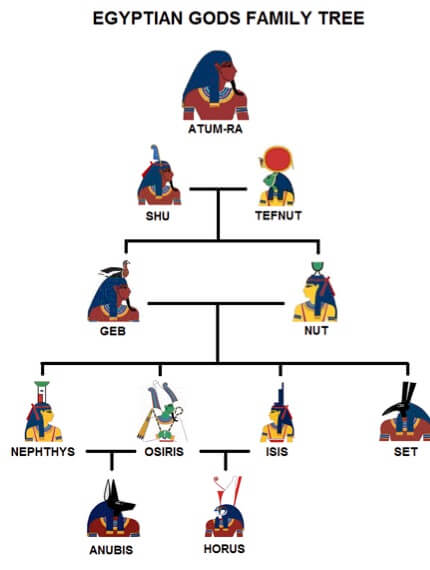 Egypt’s creation myths are complex and offer several versions of how the world unfolded. They believed that the earth was created out of chaos by the god Atum-Ra. In the beginning, the world appeared as an infinite expanse of dark and directionless waters, named Nun. As the creator of the gods and humans, Atum-Ra was responsible for bringing order to the heavens and the earth. As Lord of the Heavens and Earth, he wears the Double Crown of Upper and Lower Egypt and carries the ankh—a symbol of life—as well as a sceptre—a symbol of royal authority.

The twins separated the sky from the waters. They produced children named Geb, the dry land, and Nut, the sky. When the primeval waters receded, a mound of earth (Geb) appeared, providing the first solid dry land for the sun god, Re, to rest. During the dynastic period, Atum was also known as Re or Ra, meaning the sun at its first rising.

In relation to the creation of man, Egyptians believed that humans were created from the Eye of Re. The familiar eye motif is an enduring symbol for the creator, Atum, for Re and for Horus, the son of Osiris and Isis.1

Geb was frequently portrayed as the father of snakes, and was often depicted as such, or as a man with the head of a snake. Geb was also believed to be the father of four important Egyptian deities: Osiris, Isis, Seth, and Nephthys. In addition, the pharaohs believed themselves to be descendants of Geb. In fact, the throne of the pharaoh was referred to as “The Throne of Geb”.2

We can see in these myths some of the biblical ideas of creation outlined in Genesis 1, but with an idolatrous twist. 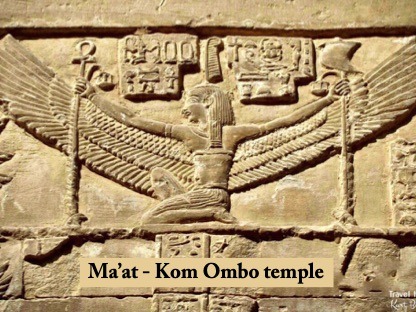 Wisdom, justice and the afterlife

Egyptians believed that the gods had created the world according to a ruling principle of truth and justice called Ma’at. The image of Ma’at is above and the picture is taken at Kom Ombo temple. Ma’at is represented as having wings either outstretched or pointing forward. Ma’at was the personification of truth, justice, and the cosmic order.

The ancient Egyptians believed the universe had an order to it, and it was Ma’at who kept everything in balance. This helped the ancient Egyptians develop a sense of morality and Ma’at was extremely important in achieving the afterlife. According to Ancient Egyptian mythology, after the death of the body, everyone had to pass through the Hall of Judgment, where a person’s heart was weighed on a scale against Ma’at’s Feather of Truth. If the deceased person’s heart balanced with Ma’at’s feather, they could continue their journey to the afterlife. If not, their journey ended.3

The Egyptians had a strong sense of the afterlife based on the soul leaving the body and journeying on to a better life. Whilst the Scriptures talk of the Book of Life, the Egyptians focussed on the Book of the Dead. Starting with the process of embalming, they had developed an elaborate system of rituals which they believed would be needed to prosper the journey to the afterlife.