The word “grace” (Greek charis) is used 156 times in New Testament writings. The word is particularly prominent in the writings of Paul, and his close associate Luke. Given the fact that Paul writes “by grace ye are saved” (Eph 2:5,8), and Peter said at the Jerusalem Conference, “we believe that through the grace of the Lord Jesus Christ we shall be saved” (Acts 15:11), it is appropriate that we take a closer look at grace to try and understand what is meant by the word in the New Testament writings.

Today, “grace” is primarily used as a religious word heard only in Christian circles. For example, we often hear the word grace used with qualifiers, such as: unmerited grace, general grace, special grace, justifying grace, sanctifying grace, prevenient grace and irresistible grace. However, many of these qualifiers are inferred and do not directly come from the Bible, but rather from the theological traditions of various denominations. Moreover, they carry centuries of accumulated meaning that may not match what the New Testament writers intended.

In contrast, we will show in this review that for the people who first received the New Testament writings, “grace” was NOT primarily a religious, as opposed to a secular, word. We will find that this word was commonly used in society to describe key aspects of the secular patron-client relationship which constituted the chief bond in Greco-Roman society. Significantly, we will also find that the one who brokered a grace between individuals who didn’t know each other, was called a “mediator”.

The need for historical perspective

If we want a fuller understanding of what the first century writers meant by the word “grace”, we need to step out of our setting and step into the shoes of the people who first received these writings. A good resource on this topic is the book Patronage, Kinship & Purity: Unlocking New Testament Culture (2000) by David A deSilva. 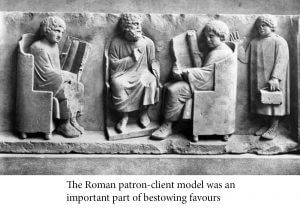 In the ancient world people were not thought of as being equal, with each person having identical rights. Although rights were sometimes granted to certain groups, these were regularly ignored in first century society. A Roman slave owner, for example, would have thought it absurd that his slave had the right to life or happiness.

It was only after the Magna Carta Libertatum (the Great Charter of the Liberties) — which King John of England was forced to sign in 1215AD — that the concept of individual rights and liberty began to take shape. Among other things, the original charter gave protection for the barons, not the common people, “from illegal imprisonment and access to swift justice”. The Pope declared the Magna Carta “null, and void of all validity for ever”. He deemed it “illegal, unjust, harmful to royal rights and shameful to the English people”.

However, once the concept of individuals’ rights took hold, the idea grew in the minds of men. It took another 500 years to take shape, and after various historical events blossomed — via the American Revolution (1775-83) — into the “Bill of Rights”, and — via the French Revolution (1789) — into the “separation of powers”, and the importance of “the rule of law”. These eventually led to the relatively modern concept of personal liberty and freedom, which protects the rights of the individual against those with power.

Grace in the First Century

In contrast to our modern perspective, ancient societies functioned on a patron-client model, whereby a patron would bestow favours upon a client who would in turn be indebted to him, even if only in gratitude. The world of the authors and readers of the New Testament was one in which personal patronage was an essential means of acquiring access to goods, finding protection or providing opportunities for employment and advancement. Seneca (4BC to 65AD), a Roman philosopher and statesman, wrote about this and said that the giving and receiving of favours was the “practice that constitutes the chief bond of human society”1.

In those times, there was limited access to goods. Property, wealth and power were concentrated in the hands of the few. As a result, there was great inequality between the “haves” and the “have-nots”. The kinds of benefits sought from patrons depended on the needs or desires of the petitioner. They might include plots of land or distributions of money to get started in business, or even promotion in government office or in the military. Access to these things was through personal connection rather than channels regulated by laws and legislation, as currently exist in most Western democracies.

Society was organised and operated on the basis of giving and receiving of favours. To prosper in any project, the client needed the resources that only a patron could offer. The giving of such were called favours, which is our New Testament word for grace. The patron, on the other hand, benefited from the loyalty and honour of the recipient who received his favour. In general terms, Jesus speaks of this relationship in Luke 22:25, when he refers to the “benefactors” who exercised authority in the world.

To Greek and Roman moralists, “grace” must be met with “grace”, and favour must give birth to reciprocal favours; indeed gifts must always be met with gratitude. The response to a grace wasn’t expected to be exactly proportional, as a response is not a payment.

Nevertheless, a response was expected from the one who received a grace, and this brought glory and honour to the patron who gave it. In a similar way, Jesus says: “By this my Father is glorified, that you bear much fruit” (John 15:8 ESV). If the grace received did not inspire such a response, it was worse than wasted, as both the benefactor and the recipient were dishonoured.

Significantly, when Peter entered into the house of Cornelius, the Roman Centurion, he summed up the ministry of Jesus as follows. He said that, “God anointed Jesus of Nazareth with the Holy Spirit and with power: who went about doing good, and healing all that were oppressed of the devil; for God was with him” (Acts 10:38). Cornelius would have readily understood what Peter was saying. God is presented as the ultimate benefactor, who gave the Holy Spirit and power to Jesus. Jesus then used the power he received to become a benefactor to others. We see this in the original word for “doing good”, which is a verbal form of the noun “benefactor” (Luke 22:25). Benefactors bestow “grace”, and Jesus’ works shows that his was a ministry of grace. Jesus is presented as a wise and gracious benefactor, who used the power he received to help others.

In the Greco-Roman world of the first century, benefactors would show their beneficence (grace) in two main ways:

Firstly, they would show favour/grace in a general way by using their own resources for general public welfare. Sometimes they would sponsor a town, or particular projects such as building roads, bridges, theatres and public works. They would also dispense bread to the needy.

Secondly, they would show favour/grace to a particular individual or group of individuals (the client or clients). These may receive appointments to political or military power, funds to establish a business or trading entity, or some other project sponsored by their benefactor. In some special cases, a benefactor might also invite the client to become part of the benefactor’s family, and an heir to all that he has. There are many examples of this in Roman history; for example, Julius Caesar adopted Octavian (later Augustus) as his son and heir; Augustus adopted Tiberius as his son and heir.

Moreover, the concept of showing favour or grace could also be misused, as when those with power manipulated justice for their own ends. For example, we read, “Meanwhile he (Felix) also hoped that money would be given him by Paul, that he might release him. Therefore he sent for him more often and conversed with him. But after two years Porcius Festus succeeded Felix; and Felix, wanting to do the Jews a favour (charis), left Paul bound” (Acts 24:25-26 NKJV ). Later, the chief priest of the Jews “desired a favour” (charis) of Festus against Paul, and asked Festus to send Paul to Jerusalem for trial. In response to their request, Luke records that, “Festus, wanting to do the Jews a favour (charis), answered Paul and said, ‘Are you willing to go up to Jerusalem and there be judged before me concerning these things?’” (Acts 25:2-3,9 NKJV ). In doing this favour for the Jews, both Felix and Festus would no doubt have expected something in return.

It is also worth noting that faith (Latin fides; Greek pistis) is a term also very much at home in patron-client relations, and had, like grace, a variety of meanings as the context shifted from the patron’s faith to the client’s faith. In one sense, faith meant “dependability”. The patron needed to prove himself reliable in providing the assistance he or she promised to grant, while the client needed to “keep faith” as well, in the sense of showing loyalty and commitment to the patron and to his or her obligations of gratitude. A secondary meaning is “trust”, which was needed if the relationship was to work.