The fate of the Persian fleet

At the same time the battle of Thermopylae was taking place, a naval battle was taking place in the straits of Artemisium. This conflict consisted of a series of naval engagements over three days and took place simultaneously with the land battle at Thermopylae, in August or September, 480BC. The outcome of the first day produced no clear victor and the Persians sailed down the coast of Magnesia looking for a secure place to moor their ships. However, they found it difficult to find any suitable harbours because of the size of their fleet (1200 triremes).

When they finally stopped for the night, the ships were moored eight-deep all along the beach. It was then that the providence of God was evident as He sent a powerful north-easterly storm across the coast which resulted in 400 warships and an unknown number of supply ships being lost.

The Greeks were still outnumbered—271 ships to 800—and so they decided to use narrow sections of water at Artemesium so the Persians couldn’t engage all their ships at once. By doing this, they managed to capture 30 Persian ships on the first day with another 200 being wrecked in another storm that night. On the second day there were severe losses to both sides; and hearing that Thermopylae was lost, the Greeks retreated to Salamis, an island near Athens.

In the wake of Persia’s advance south, the Greeks resolved to abandon Athens and retreat to the Isthmus of Corinth, the narrow entrance to the Peloponnese, where they would construct a defensive wall and fend off the Persian threat. This resulted in floods of Athenian refugees being ferried to safe havens such as the islands of Salamis and Aegina.

A few citizens did stay behind, erecting a wooden wall on the central Acropolis in the hope of defying insurmountable odds and fending off the Persian assaults. It failed. Having entered the city, the Persians laid siege to the central citadel and, although the resistance lasted many days, the Persians ultimately overwhelmed the defences. None were spared; the Acropolis was razed to the ground.

The battle at Salamis was one of the greatest and most significant military victories in antiquity. Overcoming superior numbers with daring tactics and sheer determination, the allied Greek forces won a freedom which would allow a never-before-seen period of artistic and cultural endeavour, which would form the foundations of Western culture for millennia. 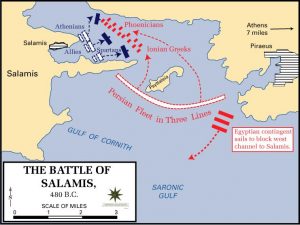 Although heavily outnumbered, the Greek allies were persuaded by the Athenian general, Themistocles, to bring the Persian fleet to battle again, in the hope that a victory would prevent naval operations against Corinth. The Persian king, Xerxes, was also anxious for a decisive battle. As a result of subterfuge on the part of Themistocles, the Persian navy sailed into the Straits of Salamis and tried to block both entrances. In the cramped conditions of the Straits the great Persian numbers were an active hindrance, as ships struggled to manoeuvre and became disorganised. Seizing the opportunity, the Greek fleet formed three lines and scored a decisive victory, sinking or capturing at least 300 Persian ships.

The Persians were soundly defeated, and Xerxes was so shaken that he returned to Persia with what remained of their fleet, leaving behind Mardonius his military commander, and 300,000 troops to stay in northern Greece during the winter and fight the Greeks on land the next year.

Battles of Plataea and Mycale

These battles were the final battles between the Greeks and the Persians. In the spring of 479BC, the Persian fleet regrouped at Samos, whilst in June, Mardonius left his winter quarters in Thessaly and once again invaded Attica before withdrawing to hold a line at Plataea near ancient Thebes, where he built a large, fortified camp.

Both sides had amassed huge armies. Almost every city in Greece had sent a contingent to support the effort.

The battle of Plataea itself was actually a series of battles. Aided by a contingent of Boeotian collaborators, the Persians were initially very successful, but when Mardonius himself was killed leading a cavalry charge, the tide changed and most of the force was annihilated.

According to Herodotus, the Battle of Mycale occurred on the same afternoon as Plataea. A Greek fleet under the Spartan king, Leotychides, had sailed to Samos to challenge the remnants of the Persian fleet. The Persians, whose ships were in a poor state of repair, had decided not to risk fighting and instead drew their ships up on the beach at the foot of Mount Mycale in Ionia. An army of 60,000 men had been left there by Xerxes and the fleet joined with them, building a palisade around the camp to protect the ships.

However, Leotychides decided to attack the camp with the allied fleet’s marines. Seeing the small size of the Greek force, the Persians emerged from the camp, but the Greek hoplites again proved superior and destroyed much of the Persian force. The ships were abandoned to the Greeks, who burned them, crippling Xerxes’ sea power and marking the ascendancy of the Greek fleet.

With the twin victories of Plataea and Mycale, the second Persian invasion of Greece was over, and the future threat abated.

After these battles, the Greeks pushed the Persians out of Macedonia and Thrace and took control of the Bosporus and Hellespont. Two leagues were subsequently formed, one led by Athens and the other by Sparta. Over the next 150 years there were many wars between the two groups until Philip II of Macedonia arrived on the scene. He fought an alliance of some of the Greek city-states led by Athens and Thebes and decisively defeated them at the battle of Chaeronea in 338BC.

Since Philip wanted the southern Greeks as his allies for his planned campaign against the Persians—and he wanted to leave a stable Greece in his rear when he went on campaign—he marched first to Thebes, which surrendered to him, and expelled the Theban leaders who had opposed him; recalled those pro-Macedonian Thebans who had previously been exiled and installed a Macedonian garrison.

He treated Athens very leniently. His motives are not entirely clear, but one likely explanation is that he hoped to use the Athenian navy in his campaign against Persia, since Macedon did not possess a substantial fleet; he therefore needed to remain on good terms with the Athenians.

Through the actions of Xerxes, the whole of the Persian empire was awoken to war against Greece as predicted in Daniel 11:2. But this in turn only served to ignite an anger in Greece which was only assuaged when Alexander the Great broke the Persian empire 160 years after Xerxes’ failed campaigns (Dan 8:6-7).