The recent announcement by President Trump outlining the “deal of the century” is significant from a prophetic point of view. For many years now the peace process in the Middle East has languished due to the failure of all parties to resolve competing requirements. Israel wants security and international recognition. The Palestinians want their land back and an independent State with full control of their affairs. So far neither side has yielded, and this has led to a stalemate in negotiations.

This has resulted in Israel surrounding itself with security fences and barriers to protect its citizens from terrorist attacks, and the Palestinians objecting to a life of “occupation” with no means of defence and no right to self-determination.

From a prophetic perspective we expect the following major events to occur in relation to the peace process:

We are witnessing the vibrancy of Israel’s economic advancement, their settlement in a number of significant areas in Judea and Samaria and their close relations with the USA and other like-minded countries. We are also seeing a warming of relations with Saudi Arabia and the Gulf States.

Full peace and complete security have, however, not yet been achieved. Indeed, from the brother-hood’s perspective we may be taken away before this complete picture materialises. But we ask the pertinent question: Will President Trump’s plan start the peace process rolling once more?

The peace plan itself

The peace plan, although heavily weighted in Israel’s favour, attempts to tackle a number of intractable problems that have eluded previous administrations. The White House website states: “This Vision is the most realistic solution to a problem that has plagued the region for far too long. It creates a path to prosperity, security, and dignity for all involved. If the parties can agree on this framework as a basis for negotiations, the potential for both the Israelis and the Palestinians and the region is unlimited.” 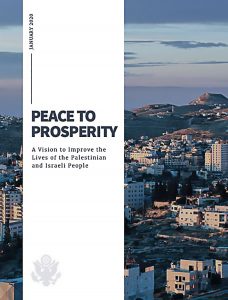 Here are the key details of the 181-page “Peace to Prosperity” plan: 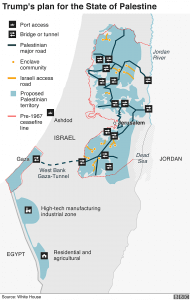 This is the type of map which was released by the White House setting out borders for “a realistic two-state solution, offering a viable path to Palestinian statehood”.

The White House indicated that this proposal increases the size of Palestinian territory and allows for a a high speed train tunnel linking Gaza with new Palestinian State.

There is no doubt that the peace plan favours the Israelis. Hence following President Trump’s remarks, Prime Minister Netanyahu endorsed the deal as a basis for negotiations and Benny Gantz, the leader of the opposition Blue and White Party, also praised the plan, which he vowed to implement should he succeed Netanyahu as prime minister.

Israelis will head to the polls on March 2 in the country’s third election in under a year, even with Netanyahu facing bribery and corruption charges. Cynics have accused Trump of releasing the plan ahead of the elections in a bid to bolster Netanyahu’s election campaign.

The Jerusalem Post made this comment: “The “Deal of the Century” is the biggest diplomatic gift an American administration has ever given to the Jewish state since its founding. 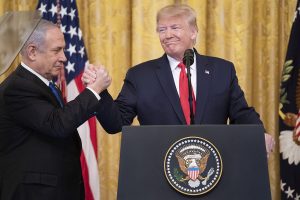 Even without reading its contents, one could see during the unveiling at the White House on Tuesday that this plan was orchestrated in tight cooperation with Israel. President Donald Trump’s gestures and comments during the announcement said it all: This is a pro-Israel plan. And Israelis received the gift with open hands. The Right appreciated the fact that Israel does not have to uproot the settlements.The Left was satisfied that once again peace is on the nation’s agenda”.

Nearly two dozen world leaders have signalled their openness to President Trump’s sweeping new peace plan for Israel and Palestine, ignoring claims in the US media that it was dead on arrival.

Australia, for example, said it “…welcomes the release of the US “Vision for Peace” by President Trump today. We welcome any initiative that can assist the resumption of direct negotiations between Israel and the Palestinians for an end to this conflict, and the agreement of a durable and resilient peace settlement.”

Many other western countries welcomed these latest efforts to strike a peace deal between Palestine and Israel, and added that they would need to study the proposals closely. The EU foreign policy chief Josep Borrell said Trump’s initiative “provides an occasion to re-launch the urgently needed efforts towards a negotiated and viable solution” to the conflict. He said the EU would “study and assess the proposals put forward”. He reiterated the bloc’s commitment to a “negotiated and viable two-state solution that takes into account the legitimate aspirations of both the Palestinians and the Israelis, respecting all relevant UN resolutions and internationally agreed parameters”.

A week later, however, the EU rejected Trump’s proposal for securing peace in the Middle East and expressed concern about Israel’s plans to annex large swaths of the West Bank that Palestinians seek for their future state. They went as far as stating that the EU might consider legal action by saying any “steps towards annexation, if implemented, could not pass unchallenged”.

Britain gave the warmest reaction of all European countries. “This is clearly a serious proposal, reflecting extensive time and effort,” British Foreign Secretary Dominic Raab said in a statement. Earlier, Prime Minister Boris Johnson spoke to Trump to discuss the plans, and Downing Street said the proposal “could prove a positive step forwards”.

Reactions from the Arab world

The Palestinians angrily rejected the entire plan. “This conspiracy deal will not pass. Our people will take it to the dustbin of history” Abbas said, hearing the proposal. “We say a thousand times: No, no and no to the ‘deal of the century’”. He went on to say that it was the “slap of the century”. A senior official in the Palestinian Authority also spoke of Ramallah’s disappointment in Arab nations’ initial muted and sometimes-supportive response to the contentious US proposal for solving the Israeli-Palestinian conflict.

Preliminary reaction from Sunni Arab countries was certainly muted but positive. Indeed, several Gulf State ambassadors were invited to the White House because of their perceived support of the plan. But all this perceived support was overturned a week later when the final death knell for the deal sounded on Monday, February 3 after the 57-nation Organisation of Islamic Cooperation (OIC) said that it was inadequate. Two days earlier, the Arab League did the same.

Saudi Foreign Minister Prince Faisal bin Farhan said that the kingdom could not support a deal that did not have East Jerusalem as the capital of an independent Palestinian state. His comments came as the OIC said Trump’s plan “does not meet the minimum aspirations and legitimate rights of the Palestinian people and contradicts the terms of reference of the peace process”.

Palestinian Authority President Mahmoud Abbas said that he would now be cutting all ties to Israel, including security cooperation, as Trump’s Jewish son-in-law Jared Kushner, who drew up the plan, tried desperately to keep it alive. 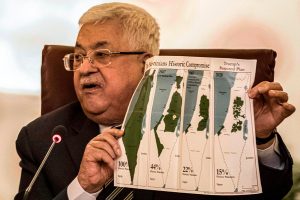 Iran predictably rejected the plan as well. Foreign Minister Mohammad Javad Zarif tweeted that the deal was “delusional”. He continued, “History has shown that violating justice makes the sword of justice more sharp,” adding “Not only will the deal of the century not bring security for the Zionists, it will institutionalise more instability than before in occupied Palestine”.

Al-Monitor ran an interesting piece relating to Russia and the peace plan. The heading of the article was: “Why Russia’s warming ties with Israel may lead Moscow to embrace Trump’s peace plan”

“Until recently, Russia had been extremely skeptical about the Trump proposal.

“The information we have shows that this future ‘deal’ will destroy everything that has been accomplished so far,” Russian Foreign Minister Sergey Lavrov said in February 2019.

At the time, Moscow was hosting 12 Palestinian movements in an attempt to reconcile the divisions between them.

Following Trump’s release of the peace plan, Russia’s Deputy Foreign Minister Mikhail Bogdanov was less dismissive. “The parties to the conflict have to embark on direct negotiations and look for mutually acceptable compromises,” said Bogdanov, whose portfolio covers the Middle East. “We don’t know yet if the American proposal is mutually beneficial”.

If regional actors “at least start negotiations on its basis, that would be a common success, and I think it is not as important who suggested the plan in the first place,” Russian Senate Foreign Affairs Committee Chair Konstantin Kosachev said.

Some policy experts in Moscow interpreted Russia’s cautious change in tone as a sign that Moscow is willing to jump on board if it finds an opening for itself. Well aware of the complexities of the plan, the divide it has created among Arab elites and its general dismissal by the Arab street, Moscow has adopted a wait-and-see approach. If the plan is rejected and fails, Russia won’t look like the one that torpedoed it. If it goes through, which is unlikely without some Russian and, perhaps, European engagement, Moscow will have a stake in the process and won’t feel sidelined by the Trump initiative.”

Donald Trump has questionable morals, but God has placed him at the head of a powerful nation to effect change in the Middle East. He has moved the country’s embassy to Jerusalem. He has publicly proclaimed that Israel’s occupation of the Golan Heights is not illegal under international law. He has been declared to be Israel’s greatest friend.

He has constantly affirmed that the previous efforts to establish peace have failed because the Oslo Accords left numerous key issues unresolved and his plan now addresses those gaps.

At the time of printing, President Trump’s proposals seem unlikely to produce the desired result. But perhaps it may prove to be the catalyst which forwards the purpose of God in establishing the kind of peace the Scriptures speak of. Abbas’ days are numbered. Perhaps a new Palestinian leader may arise with a different Palestinian perspective. Perhaps the United States may be able to coax Sunni Arabs to persuade the Palestinians to commence negotiations. Maybe this initiative will draw Russia more into the peace puzzle picture.

There are many twists and turns to come that will doubtless surprise us as we see the hand of God at work fulfilling His purpose.

Major sources for this article: